The zone tools allow you to create areas on the table that have different impacts on game objects inside them. Hand zones are particularly important because they determine the "seats" a player is able to "sit" in.

Although all zone types work differently, the creation and modification of them is all similar.

With your mouse, left-click and hold. Drag your mouse so that the created zone will have the desired width/depth, then release.

With the same zone tool selected, right-clicking on a pre-existing zone will show a context menu for it. Selecting Delete will remove the zone. 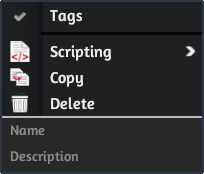 The other options in the zone context menu perform the same actions they would on game objects, allowing you to open the scripting editor, copy the GUID to the clipboard, edit the zone's tags, copy it, or set its Name /Description.

Left-clicking on a zone will provide some additional feature /options. What the left-click does depends on the zone type. You can find more information on the left-click feature below.

When you draw a zone, you aren't stuck with the shape you made it! All zones can be moved/resized/rotated by using the Gizmo Tool.

Each zone has different rules when it comes to visibility, left-click functionality and more. This section outlines those differences.

A hidden zone is an area that is able to hide objects from certain players. It can hide those objects from all other player colors or just one. The GM (Black seat) is always able to see what is within any hidden zone.

Hidden zones are visible to all players during gameplay, although their contents are hidden. You may alter how opaque the zones appear by setting the option in Configuration->Interface->Misc....

Left-clicking on a hidden zone will bring up a color circle and a gear icon. 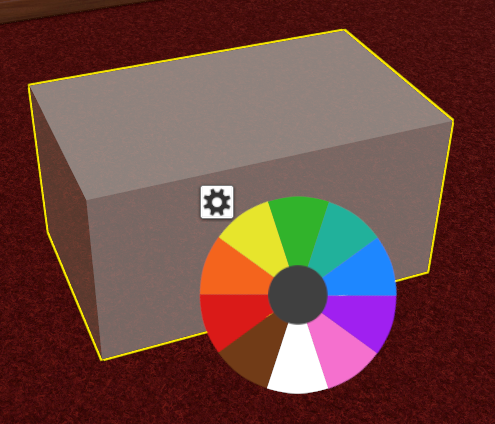 Clicking on a color will set the hidden zone will set the zone to match that color player. This determines who it is hiding for.

Clicking on the gear will open the options for this specific hidden zone. 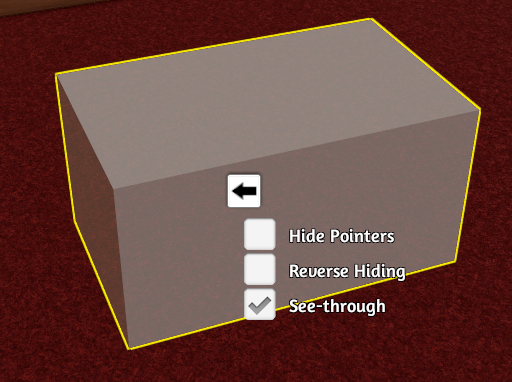 If you set a tag on a Hidden Zone then it will only hide objects inside it which have a matching tag.

A randomize zone will, any time the game is loaded, ask if you want to randomize the objects inside of it. The randomization will shuffle the positions of loose tokens as well as the order of tokens in a stack/cards in a deck.

Randomize zones are invisible to all players unless you select the randomize zone or gizmo tools.

Left-clicking a randomization zone will bring up the confirmation window to randomize the zone's contents. 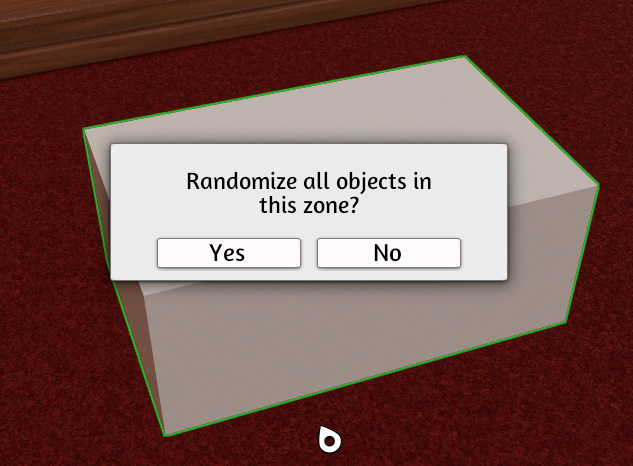 If you set a tag on a Randomize Zone it will only randomize items inside it which have a matching tag.

A hand zone represents a player color. It not only determines where their "seat" is, but also is an area that holds items. Similar to a hidden zone, the contents of a hand zone can be hidden, but with special additional options. The contents of your primary hand zone are also able to be shown on your screen in an easy-access pop-up panel.

Hand zones are invisible to all players unless you select the hand zone or gizmo tools.

Left-clicking on a hand zone will bring up a color circle. 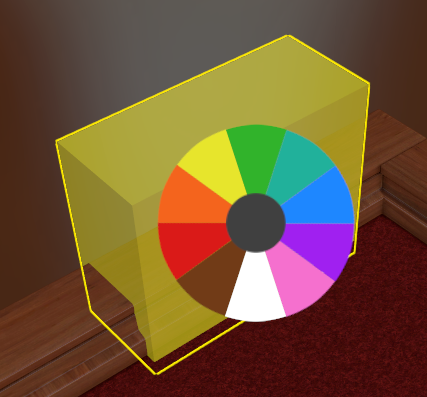 If you set a tag on the Hand Zone then it will ignore any objects which do not have a matching tag.

Layout Zones allow you to automate some standard ways to arrange objects, typically cards. It can be used to splay cards in melds (for games like Gin), or group them into bundles (for trick-taking games like Whist), or to generally lay out groups of objects in a regimented fashion. They are geenrally most useful for arranging cards, but can be used with any object if you wish.

The Layout Zone works on groups of objects. When you drop a bunch of objects into the zone it will group those objects together, and lay them out in a pre-determined manner.

When you left-click a Layout Zone you will see a big Layout button, and a small Settings cog. 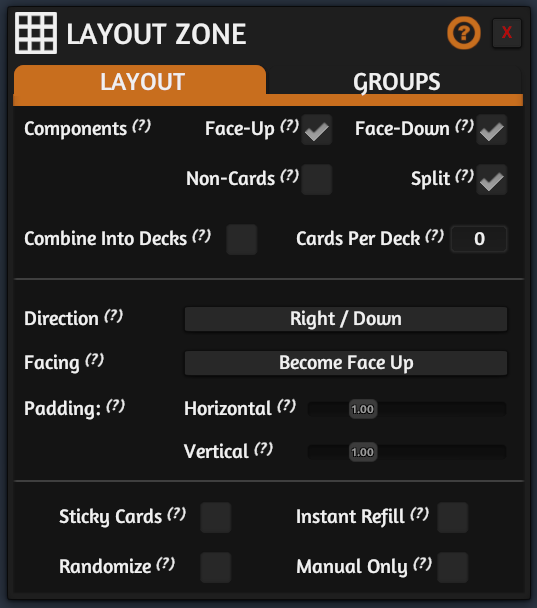 These settings govern the overall functionality of the zone: what objects it affects and how groups are arranged with regard to each other.

The Components section specifies what objects the Layout Zone will affect:

Most of these settings update live as you change them, so as long as there are objects being layed out by the zone you can play with them to see the layout in action. 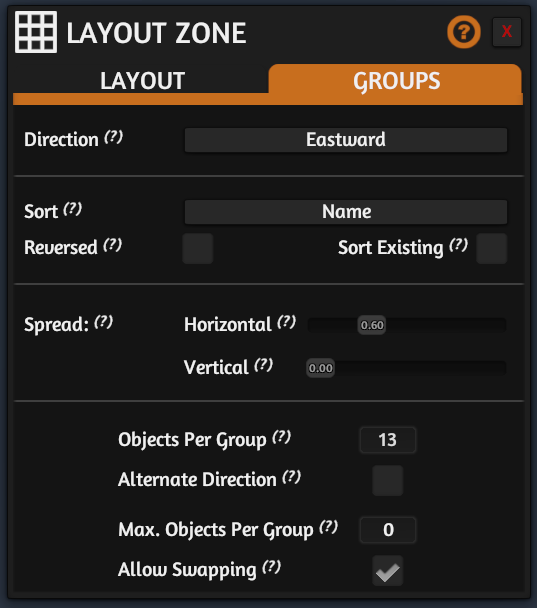 These settings govern how objects within a group are arranged. 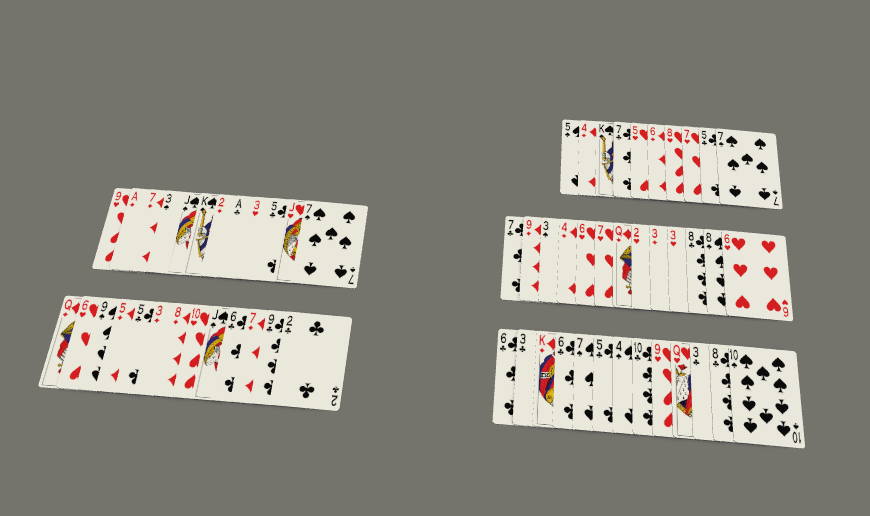 This is the same setup, except with the Group Direction set to Westward: 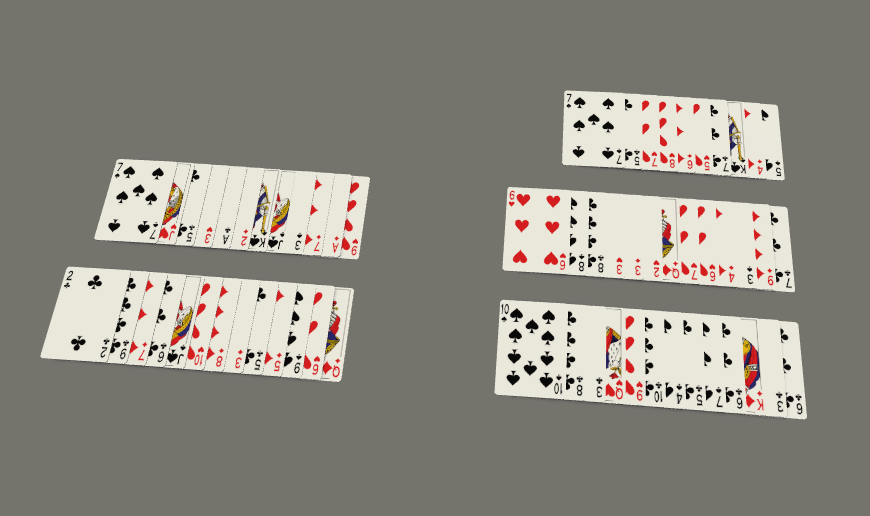 If you will be moving objects around with groups a lot during play then it is best to set the Sort to None.

The Direction setting directly relates to the two Spread settings: an Eastward or Westward direction will only make sense of the Horizontal Spread is non-zero, and likewise Northward and Southward should only be used when the Vertical Spread is non-zero.

Having to select the Layout Zone tool then click on the zone and hit the button in order to manually layout a zone is a little cumbersome, so there is a shortcut: if you right-click an object which is in a Layout Zone it can be layed-out by, it will have a Layout option. Clicking it will cause that zone to perform its layout operation. 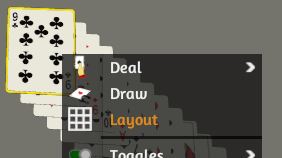 If the Layout Zone has a tag set on it then only objects with a matching tag will be layed out by it.

Fog of War is an area that is concealed, similar to a hidden zone. The difference is that concealed areas can be revealed by moving a piece set to Reveal Fog of War into it.

Left-click on a Fog of War zone opens a menu which allows you to set the following: 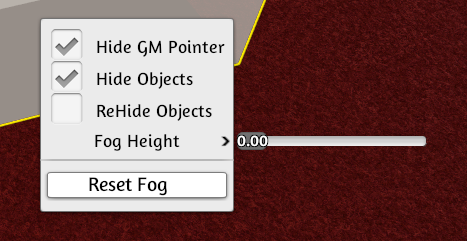 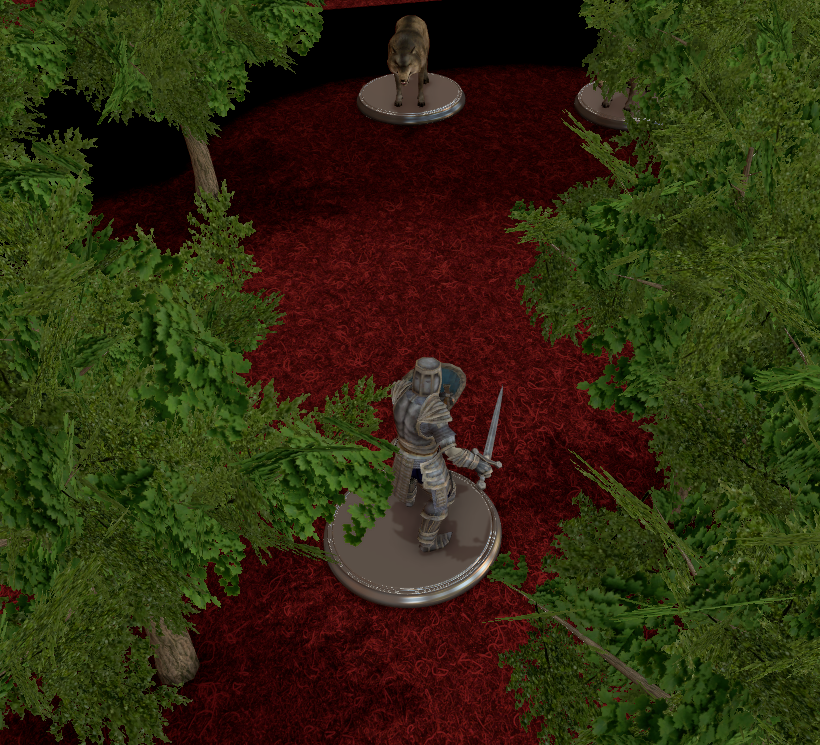 A scripting zone has no impact on game objects itself, but it can be utilized by Lua scripting to detect/affect objects in an area. It has no use outside of scripting.

Scripting zones are invisible to all players unless you select the hand zone or gizmo tools.

Left-clicking on a scripting zone copies it GUID to the clipboard. You can then paste it into your scripts. This is generally how you identify scripting zones in your code. 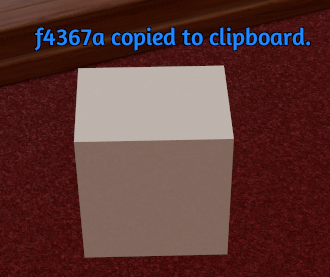 You will see a pop-up message announcing that this has been done, as well as a message in the Game chat log.

If a Scripting Zone has Tags set on it then only objects with matching tags will be reported when you do zone.getObjects() in your lua script.